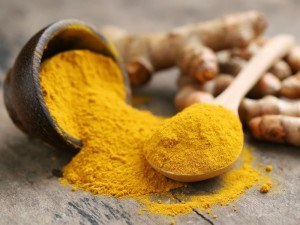 Turmeric, sometimes called the golden spice, has received much interest from both the culinary world and the medical/scientific world. A cousin to ginger and native to Southeast Asia, the spice is derived from rhizomes of the plant and has long been used for the treatment of oxidative and inflammatory conditions. Turmeric can also be used in the management of arthritis, metabolic syndrome, hyperlipidaemia, and anxiety.

While curcumin, the primary active constituent of turmeric, has been attributed to several pharmacological activities, including antimicrobial and antioxidant properties, we will focus on one of the well-known benefits, the anti-inflammatory effects of curcumin.

The Indian spice is composed of a group of three curcuminoids: bisdemethoxycurcumin, curcumin (diferuloylmethane) and demethoxycurcumin along with resins, sugars, proteins and volatile oils (atlantone, tumerone and zingiberone). 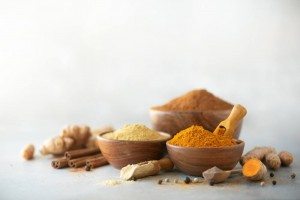 Studies show that it is a highly pleiotropic molecule with several targets and mechanisms of action. This includes modulating the biological activity of signalling molecules involved in inflammation. This active ingredient of turmeric modulates the response of inflammation by down-regulating the activity of inducible nitric oxide synthase (iNOS), lipoxygenase, and cyclooxygenase-2 (COX-2). It also hinders the secretion of monocyte chemoattractant protein (MCP), interleukin (IL) and tumour necrosis factor alpha (TNFα), all of which are involved in systemic inflammation.

The inhibition of iNOS and COX-2 are achieved by curcumin’s ability to suppress the activation of nuclear factor-kappa B (NF-κB). NF-κB, a ubiquitous transcription factor, plays a critical role in regulating inflammation, tumorigenesis, cellular proliferation, and transformation. Curcumin is believed to suppress pro-inflammatory gene expression and the activation of NF-κB by blocking the phosphorylation of factor I-kappa B kinase (IKB), an inhibitor of kappa B. Suppressing the activation of NF-κB, in turn, down-regulates the expression of iNOS and COX-2, hindering tumorigenesis and the inflammatory process.

Studies conducted in mouse models showed that curcumin also inhibited inflammation in mouse skin epidermis by downregulating lipoxygenase and cyclooxygenase pathways. The inhibition of inflammatory cytokines by curcumin is accomplished through various mechanisms. Some studies suggest that curcumin regulates the activation of some transcription factors like NF-κB and activating protein-1 (AP-1), thus inhibiting the expression cytokine gene expression. Another way curcumin inhibits the production of cytokine is by down-regulating intercellular signalling proteins such as protein kinase C.

Research shows that curcumin, the active constituent of turmeric, has many therapeutic actions such as anti-inflammatory, neuroprotection, antimicrobial, antispasmodic and antihepatotoxicity to name a few. In addition to having strong oxygen radical scavenging activity, curcumin has also been seen to cause oxidative phosphorylation to uncouple and to stabilize lysosomal membrane. Its anti-inflammatory property is attributed to its ability to inhibit AA metabolism, NF-κB, cytokines, COX and LOX. And since it doesn’t have gastrointestinal side effects, it can be an invaluable drug for the management and treatment of cancer, arthritis and other inflammatory diseases and conditions